Back in 2016 Kicking off Against Cancer was formed on the back of a successful Guinness World Record Attempt for the longest marathon playing indoor football. Two teams battled it out for 36 hours non-stop under the Kicking Off Against Cancer name.

This led to us founding the official charity and for over a year now we have been fundraising, helping create memories for thosebattling cancer, and providing some respite from treatment and the daily fight they endure.

The fundraising we rely on to do this comes in many forms. We are incredibly grateful for all the support we receive and have been very fortunate to have an ever growing band of loyal supporters and heroes aiding us with the work we are doing.

This summer we are organising something that we believe can capture the imagination of our supporters both new and old, in order to raise important funds to help more people and also raise awareness of what we are doing and why.

On Sunday 14th July 2019, Kicking Off Against Cancer will be attempting to break another Guinness World Record, this time for the Longest 11-a-side Football Match! 36 players will enter The Air Dome, found at Cardiff City House of Sport, Leckwith and play football until Saturday 20th July.

We have recently found out that two teams from Germany have recently broken the current official Guinness World Record of 108 hours. They not only played for longer than our planned 135 hours. They played for an incredible 168 hours – exactly 7 days! (Although their attempt has not yet been officially confirmed by Guinness). A quote contained in the article from the event organiser read as follows:

“We wanted to pack a whole load of hours on the previous record so that nobody would have the idea of ever contesting the title again”.

We at Kicking Off Against Cancer have never hidden from a challenge and we weren’t about to back out of this one.

Thanks to the consideration of the venue Cardiff House of Sport and the sheer dedication and passion of our players signed up so far, we will now be attempting to break the latest record attempt by playing 169 hours of football from Sunday 14 July to Sunday 21 July! 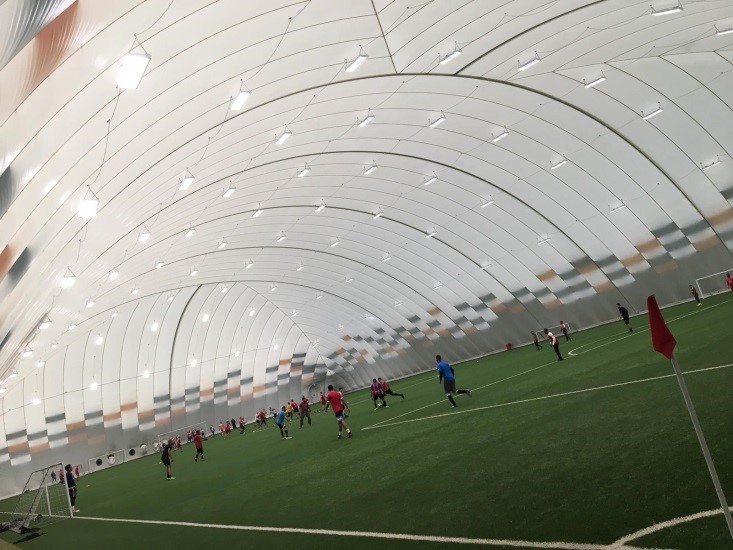 Inside the air Dome

This mammoth task has now gone up a notch. The players will be spending over 7 days playing football in the Air Dome, along with the officials, witnesses and other volunteers – all to raise money and awareness for Kicking Off Against Cancer!

The Board of Trustees have worked hard behind the scenes to get this event off the for over six months. The news that came out of Germany in mid June was far from ideal, but we see this as an extra challenge to overcome. It is nothing compared to what anyone diagnosed with cancer is going through.

However with such a huge challenge ahead, we still really need your help. If you’ve been thinking of undertaking some charity work or just want to get involved in this unique event, then now is your chance. We still require a few more players, witnesses and officials to cover some of the original timeslots, along with the extra day and a half.

Whether it is volunteering to do some witnessing, lacing up your boots, dusting off your ref’s whistle or just simply being a pair of hands to help out. WE NEED YOU!

Follow this link to view more informtaion on our event page

Tweets by @_KOAC
This campaign is now closed, and no longer accepting donations.

Kicking Off Against Cancer Football Match

11 a side football for 165 hours straight

Well done to Rob and the rest of the team. you should all be so proud of yourselves.

Amazing work everyone, well done! Fingers crossed for that record!