Our beautiful Josh was shockingly diagnosed with acute myeloid leukaemia on 7th July 2019, a week prior to this he was perfectly healthy boy running around, playing football every time he had the chance. 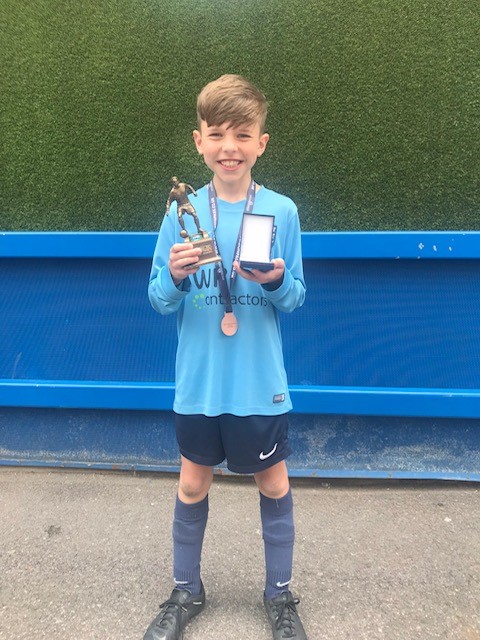 On 2nd July 2019, Josh can home from school with a slight pain in his ribs and was sick (once) that evening. The next day Josh had a temperature although he wasn't sick again. The next day Josh was complaining of a headache and still slight pain in his rib and his neck was getting a little stiff in the late evening, although he now had no temperature. His symptoms seemed like normal child illnesses that were going around so we had no concern at this point.

On the morning of Friday 5th July I was on the phone to the GP and as I was talking to the doctor, Josh’s fingernails and toenails went blue. As I said this, the GP said 'hang up and dial 999!' so I did. The ambulance and paramedics arrived, they checked him over and they asked if he had fallen over recently. I then remembered that Josh had fallen and hurt his ribs while at school on the 1st July. We were sent to the William Harvey Hospital for an x-ray which came back clear and we were told he had muscular skeletal damage and slight whiplash to his neck. We were told that Josh would need a few days to recover and were sent home.

The next day Josh started being sick again. I knew something wasn’t right, he hadn’t eaten for a couple of days and was drinking but not going to the toilet, and suddenly he couldn’t stand on his right leg as it was too painful.

We took him back to A&E where they took his bloods and at 3am on the 7th July we got the devastating news that Josh had an acute form of leukaemia, but we were unsure on which type he had. An ambulance was already despatched to take us to St George’s Hospital in London and were told that we would need to pack for 7-10 days as Josh would need to start chemotherapy.

Once at the hospital, Josh was full of beans, making the nurses laugh and talking about his brothers and his football team whilst getting hooked up to all of the machines. He was so brave and not scared or worried at all. He was our little hero!

We were then given the acute myeloid leukaemia (AML) diagnosis, they went through the chemo options and treatment started.

Josh’s white blood cell count began to fall but then started to rise again and unfortunately Josh began getting some complications which meant he started to haemorrhage in his brain and lungs. He was then sedated to help him relax and was put on a machine to clean his blood of the white cells but they still continued to go up. His liver and kidneys then started to swell.

He started to deteriorate quite quickly and we were informed on the evening of Monday 8th July that they didn’t expect Josh to survive the night. We were in complete disbelief in everything that was happening. How could our boy, who was perfectly healthy a week ago, be so poorly?

Josh gained his angel wings in the early hours of Tuesday 9th July with my husband and I laying of either side of him while listening to his favourite Ed Sheeran album.

The nurses and doctors gave him their all.

Josh was such an inspirational boy and the impact he has had on people, and how he touched so many lives, is just amazing! Our 9-year-old boy had such an amazing smile. His nickname was smiler! He was such a caring loving boy that looked out for everyone! He is so deeply missed by us, his brothers, family and friends. Josh was one in a million and he was a star! He played football for Dover Rangers and the chairman has organised for a little gold star to be placed on their kit in memory of Josh.

We know he would want us to help children with leukaemia and so that is what our mission is! We hope that Josh’s Gold Star Fund will raise as much money as possible to hopefully improve treatments and find a cure for childhood leukaemia.

You can make a donation by cheque, payable to CCLG, and sent to us at this address. Please ensure you make it clear that the donation is for Josh's Gold Star Fund so that your donation is allocated to the correct fund.

You can also make a donation by text message:

Monies collected from Christmas Card fund. xx From Jackie Dove and all the Staff

CHARITY BOXING. Huge thank you to everyone who came to support me in buying tickets and also to people involved in buying raffle tickets to pick my walk out song and to those who donated. Also to Wayne Morley and Pete stoten for the amazing opportunity.